Of vital importance to the success of the Allies in the Second World War were the doughty Canadian corvettes. These vessels were equipped to detect and destroy the German U-boats (submarines) that threatened the convoys of ships carrying men and supplies from North America to Britain.

The H.M.C.S. Oakville, a Flower-class corvette, was constructed at Port Arthur, Ontario. It was christened and formally adopted by the town of Oakville in an eventful ceremony on 5 November 1941. The ceremony began in Toronto where twelve Oakville school children, accompanied by a group of dignitaries, boarded the ship for the hour-long journey to Oakville’s Lakeside Park. Cheering crowds from Oakville and the surrounding district greeted the ship’s afternoon arrival.

Everyone sang “Rule Britannia” and “There’ll Always Be an England,” and watched as the ship was christened by the wife of Oakville’s Mayor Deans. The H.M.C.S Oakville showed off its maneuvers and the crew received presents from the Oakville community, including radios, windbreakers, and ditty bags containing “comforts” knitted by the women of Oakville and district.

Less than a year after the ship sailed away, the town celebrated the courageous capture of a German U-boat by the H.M.C.S. Oakville in August 1942. While attacking a convoy between Cuba and Haiti, the U-boat was spotted and successfully damaged by a U.S. Navy plane. Alerted by the plane’s crew, the H.M.C.S. Oakville went after the U-boat. A gunner on the corvette made a direct hit and crippled one of the U-boat’s guns. The captain ordered two Oakville crew members, Lt. Harold Lawrence and Stoker Petty Officer Arthur James Powell to board the U-board and subdue the German crew.

Armed with only a pistol each the two bravely subdued and captured the U-board crew. A destroyed U-boat and the capture of its crew was cause for celebration across Canada, but Oakville could feel a special pride in its namesake.

In November 1942 the two crew members responsible for the capture were given a warm and tumultuous welcome when they visited Oakville. Over two thousand people attended the celebratory ceremony where Mayor Deans declared, “We adopted a ship and we’re proud parents.” 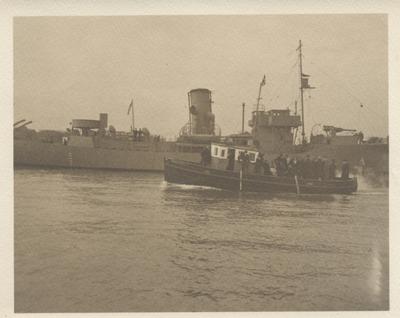 The launch Esperanza ferried the christening party to and from the H.M.C.S. Oakville.  [ Image Details ]

The Lorne Scots Pipe Band, veterans, and Boy Scouts marched in the parade to celebrate the christening ceremony of the H.M.C.S. Oakville. [ Image Details ]